Our lab has a research seminar. Please visit us according to the schedule

In this seminar we looked at the knowledge discovery in databases as an essential step to identify valid, novel, and usage patterns for decision making. There are many real-world scenarios, such as bankruptcy prediction, option pricing or medical diagnosis, where the classification models to be learned need to fulfill restrictions of monotonicity (i.e. the target class label should not decrease when input attributes values increase). For instance, it is reasonable to assume that a higher debt ratio of a company should never result in a lower level of bankruptcy risk. Consequently, there is a growing interest in the data mining research community concerning monotonic predictive models.
Transformer Hawkes Process Models, September 17

During this session we discussed that capturing the occurrence dynamics is crucial to predicting which type of events will happen next and when. These data often exhibit complicated short-term and long-term temporal dependencies. A common method to do this is Hawkes processes. To enhance their capacity, recurrent neural networks (RNNs) have been incorporated due to RNNs’ successes in processing sequential data such as languages. Recent evidence suggests self-attention is more competent than RNNs in dealing with languages. Similarly, most of the existing recurrent neural network based point process models fail to capture such dependencies, and yield unreliable prediction performance.
Generative Prior Selection for Continual and Transfer Deep Learning, August 24

In this seminar our experts placed an emphasis on specific disadvantages inherent in deep learning methods that are affected by fact that deep neural networks have a large number of configurable parameters. They require large high-quality labeled datasets to avoid overfitting typical for small datasets. At the same time, training on incrementally arriving data leads to forgetting the previously learned distribution. Thus, deep learning models usually fail on small datasets or incrementally updating distribution over samples — so called Continual Learning framework. Bayesian approach can be used to resolve these challenges. In particular, training on small datasets can benefit from a good initialization provided by accurately chosen implicit prior over the parameters of a Bayesian neural network. At the same time, given a pre-trained prior, one can update the prior with the new data arriving in Continual Learning paradigm.
2019

On 14th of November we conducted Sberbank Open Doors Day at Skoltech: presentation of thesis topics for master students provided by Sberbank. About 15 students who haven’t decided on their advisor yet participated in this event. From Sberbank side Risk department and Robotics lab talked about their problems. From Skoltech side Maxim Panov and Alexey Zaytsev presented their view on how Data Science in Sberbank works. 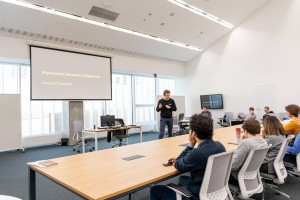 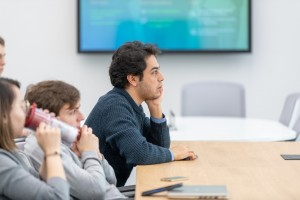